Despite the somewhat cloudy forecast, it’s a beautiful sunny day for the start of the Integrate 2019 conference. The location is the well-managed Liverpool Street etc.venues and at 8.15 in the morning it’s already bustling with keen integrators wanting to know more about Microsoft’s roadmap for BizTalk and Azure. The auditorium was at capacity (around 500 people) and the show of hands for newcomers to the conference, in its eight-year anniversary, confirms the growing interest in the Microsoft integration space.

Saravana Kumar (BizTalk360) opened the conference with an overview of the product range including: @BizTalk360 for monitoring and administering BizTalk Server environments; Serverless360 for managing the serverless functionalities in the Azure space; Atomic Scope for monitoring hybrid environments of BizTalk Server and Azure Logic Apps; and Document360 for collaboration and publishing self-service knowledge for software applications.

Saravana closed out his welcome address with the announcement of a new identity under the Kovai Limited brand, highlighting the diversification in the range of products now on offer under the 360 label.

The first keynote speech was Jon Fancey, Group Principal PM Manager for Pro Integration at Microsoft. Jon drew our attention to the fact that Logic Apps is growing at “stupendous speed” with over 500K active applications, 110B monthly executions, 35K active subscriptions, and is currently used in 29 regions throughout the world – growing to 35 in the next months.

On the strength of this growth, in April 2019 Microsoft made it into Gartner’s Magic Quadrant for Enterprise Integration Platform as a Service. 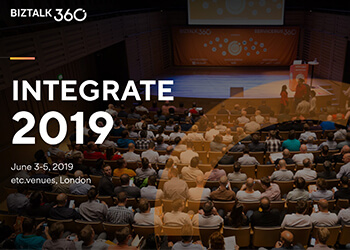