Last week, Microsoft announced the public preview of their brand new BizTalk Migrator tool, releasing the open source code to the community on Github. Since then there has been a flurry of excitement and speculation from the industry around this tool and its technical capabilities. But, what does this actually mean for the businesses facing the challenges of BizTalk Migration.

Here, our Managing Director, Mark Hunt provides a potted history of BizTalk, Azure and the challenges of migrating between the two. He also provides context as to why this could be a game changer for many enterprise-level organisations and how migration specialists, such as Affinus are still an incredibly important part of the migration and ongoing support journey. 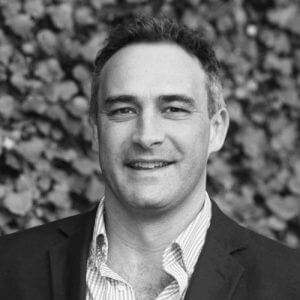 Microsoft has released its BizTalk Migrator. An open-source tool that helps IT teams to automate the process of migrating software technology assets (coded business processes) from BizTalk Server (on-premises) to Azure Integration Solutions, the Microsoft Cloud platform for integration. The announcement is a significant development for customers invested strategically in Microsoft for their integration platform. It could also be of interest to organisations using integration environments from other vendors that are moving to Azure.

The History Behind the Announcement

In 2000, Microsoft released integration software called Microsoft BizTalk Server. Since then, the product has undergone around ten revisions, the current version being 2020. There are an estimated 10,000 customers worldwide using BizTalk, with about 2000 of these being large enterprise customers. BizTalk is used across many industries and by some of the world’s best-known brands.

In 2008, Microsoft released Azure, their cloud computing platform, Since then Microsoft has been migrating all of their server products to the cloud. BizTalk Server’s cloud equivalent is Azure Integration Solutions (AIS), which is an entirely different platform. Until the announcement of the BizTalk Migrator, there was no obvious BizTalk migration path that did not involve a complete rewrite of existing code. Microsoft have been a leader in Gartner’s Magic Quadrant for Enterprise Integration Platform as a Service for some years, and the announcement will likely strengthen their position.

While the BizTalk Migrator does not yet enable a like-for-like migration to AIS, it does handle the translation of some asset types, making aspects of migration more manageable and more cost-effective; more on this later. Additionally, it is now possible to run Azure on-premises, which means that BizTalk could be migrated to Azure and still be run within a client’s own datacentre.

The Challenge of BizTalk Migration

Customers that are loyal to Microsoft and that have traditionally run their systems on-premises face two significant challenges when moving to the cloud.

First. Over many years of running and integrating their disparate systems on-premises, organisations have developed a significant stock of integration intelligence that knit their systems together in a unique configuration that best supports their business. This intelligence developed explicitly for their on-premises environment, is embedded in software code. There is no easy way to transfer this intelligence into the cloud without rewriting the software for a new platform. Such a rewrite can be expensive and time-consuming.

Second. Migration is not an overnight process. It is necessary to evolve systems to the cloud and run a mixed environment of on-premises and cloud, that communicate with one another and provide a transparent interface to the business and customers. Running such an environment requires three skills sets. On-premise integration expertise (legacy), cloud expertise (future), and on-premise / cloud integration expertise (transition). It is unusual for organisations to invest in such a diverse range of technological skill, and the norm has been to back their business on a specific technology where possible.

How the BizTalk Migrator Tool Can Help

The BizTalk Migrator tool partly addresses the two challenges outlined. How helpful it can be for any given organisation will very much depend on the kind of integrations involved and the technical resources available. 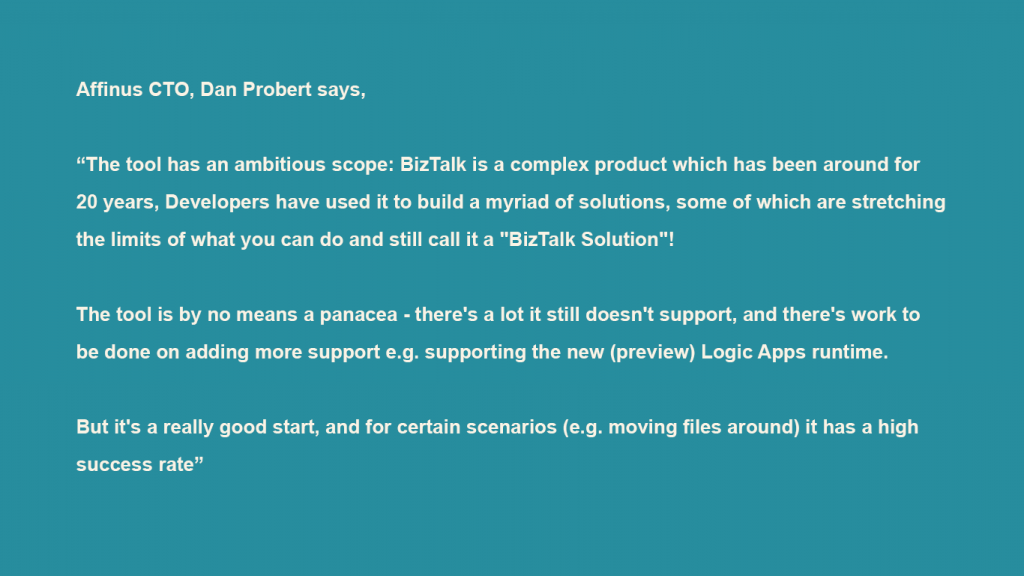 From a business perspective, perhaps what is most valuable is that the announcement starts a conversation about the strategic choices being made for on-premises or cloud platforms and for evaluating hybrid solutions in the Microsoft camp.

A useful starting point for such a conversation is to take an inventory of all existing integration assets and to get clear about how valuable they are to the organisation, how complex they are, and how much bespoke intelligence they encapsulate.

Once an inventory is in hand, it will be possible to determine which assets will become redundant, which might be taken up in future developments or in other systems, and which need to be migrated to the cloud or at least to a cloud enabled technology. For the assets that need to be migrated, an analysis can be conducted to determine how much of the existing code could be automatically translated by the BizTalk Migrator tooling and what will need to be converted  manually; budgets and timescales can then follow to allow a proper cost-risk-benefit assessment of migration.

As cloud services become more reliable and trusted, customers will return their focus to the business side of their offering and rely on professionals to provide the software expertise to support their integration needs.

We are well equipped to deal with the challenges of BizTalk migration. We have been working with BizTalk Server since its inception and have in-depth technical knowledge of the platform. We have also been supporting enterprise-level clients for over a decade with large and complex integrations. SEE OUR CASE STUDIES.

This experience means we can very quickly and efficiently conduct a detailed analysis of an organisation’s BizTalk estate and provide a report illustrating how much of the existing code could automatically translate to Azure, and how much will require a manual rewrite. The report also indicates risk factors, costs and timelines. Additionally, our teams can either work alongside an incumbent Microsoft partner to offer support and training or take on the design and development as required.

We have the legacy aspect covered with our in-depth technical knowledge and experience with BizTalk. We also have the future part covered as we have collaborated with Microsoft with Azure from the beginning. In fact, we were involved in early product development and today, we support the community with technical training and collaboration. We have also helped numerous clients with their adoption of Azure from design and proof of concept to training, development and support. Part of the our mission is to inform the evolution of best practices for Azure for development and integration.

With regard to the transition, Affinus have attained a deep working knowledge of the BizTalk Migrator tool, how it works, its shortfalls and its potential. We have run a seven-part webinar series in collaboration with 345 Technology, going in to some detail about the tool, with more post-launch webinar in the pipeline. We are also excited to be working with our  clients who are already migrating using the tool.

As well as supporting clients BizTalk migrations to Azure, we also support migration from other platforms. From years of experience working with integration patterns, process orchestrations and creating canonical data transformations, integration themes can be more readily identified, streamlined and recreated in Azure. And, as the BizTalk Migrator tool evolves, it may be able to take-in assets from other legacy platforms.

We believe the best place to start is with a conversation. You are welcome to contact us via email or phone. We can start with a brief overview of your current integration, cloud aspirations and business goals.

If there appears to be merit in us exploring further, we can involve your technical lead and our CTO Dan Probert and bring the goals of the business together with the IT picture. 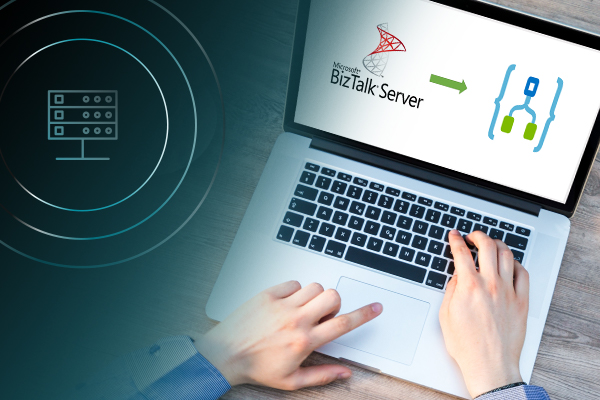